Do Not Stop To Save the Drowning Man 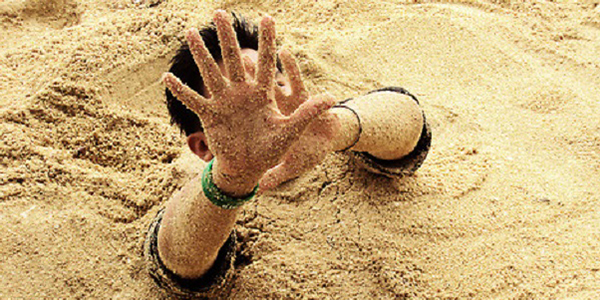 Back around 2000 or so, I had a website called “Crone of Cawdor” and one of the components of it was a section on modern mythologies. Within that section, I relayed a story told to me decades before by one of my earliest mentors. It involves an ethical dilemma of how much one should give to save another at the expense of something presumably greater.

Recently, I had an experience with this lesson that very nearly undid me.

Obvious evidence mounted all around me indicating that I was investing in the wrong direction, throwing good time, good energy, and good money into unwise places. I continued to insist that I knew best. I was absolutely certain that in the end if I just gave more, did more, dug in and believed more, if I made enough excuses and justification, my endorsement would be vindicated. Instead, my friends essentially staged an intervention and showed me the evidence I didn’t see and did not know. I had to admit that I was wrong. I had been bamboozled big time by people who I really thought loved me.

I stopped to save the Drowning Man and in doing so, I kept digging and digging, trying to find different ways to help while not achieving different results. All the while, saying, “See? I am not drowning! I am helping!” I wasn’t helping. I was drowning more all the time. I was drowning and was myself, nothing more than an means to an end for the people I was trying to help. This realization was healthy in that I needed to see that the people I wanted to help were using me and had no interest in how their actions affected me.

Clarity is a valuable tool in any situation where we are lost, even if we are lost for the best reasons. Seeing that, however, was one of the most painful and humbling experiences I have ever encountered. We never want to know that we are not as precious to someone as we believe we ourselves to be and it is a killer when that realization truly hits.

Should we help the people around us when we have it in our means to do so? Absolutely.

Should we invest in those we love and who we believe love us in return? Yes, certainly.

Should we give more than we have to give sometimes? Yes, because that teaches us that we often have more in reserve than we believe we have and can do more than we think we can do.

Should we drown ourselves to help someone who keeps tying concrete blocks to their own ankles?

Do Not Stop To Save the Drowning Man

By some means or another, Aphrodite managed to lose favor with Demeter and, as a result, lost her Goddess powers. She was rendered as helpless as a mere human.  Desperate to win back her powers, she approached Demeter and asked how she might seek to atone for her misdeeds.  Demeter arched one eyebrow and considered the request, knowing that there was a difficult task she needed to have performed. Perhaps, she thought, they might strike a deal.

“Fine,” Demeter said.  “I have a deal for you.  In this box,” she pulled out an ornate box that glowed from the inside, “is The Essence of True Love.  I took it from you when you were rendered powerless. My daughter, Persephone, is in the Underworld and she desperately needs it.  She is with her husband for the next 6 months and left too quickly to take it with her.  If she does not have true love for her husband, it will make her stay unbearable.  If you will take The Essence of True Love to my daughter in the Underworld, I will return your Goddess powers to you.”

“But it will take weeks to get to the Underworld without my Goddess powers!”  Aphrodite argued.  “How can I do that?”

Aphrodite considered the offer.  “Fine.  I’ll do it.  Give me the box.”

Demeter carefully handed her the precious box.  “Now remember,” she cautioned, “You hold The Essence of True Love in your hands.  If you aren’t careful, it could be lost to the world forever.”

“I’ll be careful,” Aphrodite assured her.

“Another warning,” Demeter said.  “You have one rule to follow as you travel and that is that you must not stop to save the drowning man.”

“That’s all,” Demeter said, “Do not stop to save the drowning man.  Now off with you.  Every moment you tarry, my daughter spends an unbearable moment with a man she does not love.”

Aphrodite set about her task.  She traveled for many days, making her way to the Underworld.  On her way, she met a young human man named Galwarth who was dedicated to a similar task.  His job was to take a message to the Boatman of the River Styx.

They traveled together for quite some time and Aphrodite found herself warming to him.  Together, they laughed and talked and his presence made the trip much more enjoyable.  Just before they reached the River Styx, her traveling companion regretfully took his leave to begin his own task and promised to meet up with her later.  He embraced her warmly as he left.

Aphrodite took the night to rest and later the next day, reached the River Styx.  The Boatman took her across and she made her way through the Underworld to find Persephone and deliver The Essence of True Love.  As she picked her way through the murky swamp, grimacing at the mud that lapped her feet, she was surprised to hear someone call her name.  As she squinted in the poor light, she was shocked to see Galwarth struggling in the depths of a tide pool in obvious distress.  He must have traveled while she slept and arrived before her!

She sat down The Essence of True Love and tried to make her way through the muck to get to him.  As she walked, the mud became deeper and more cloying.  She reached out as far as she could and still she could not grasp his hand.  If she could just go a little deeper into the mud or reach out a little further to him, she could save him.  It seemed the further she reached, the further he sank into the tide pool and the more mired in the muck she became.  She felt the tide pool pulling her in, sucking at her feet as the mud rose around her ankles, then her shins as she waded in further, stretching to reach his hand. Up to her knees and rising higher. Stretching. He felt further away than ever.

Suddenly, Demeter’s words rang in her head.  “Don’t stop to save the drowning man!”  She pulled up suddenly and knew what she had to do.  Carefully and regretfully, she started to make her way out of the muck.

“What are you doing?”  Galwarth cried.  “You can do it, just a little further!”

As she emerged from the mud, which was now covering her lower half, Aphrodite pushed the tears from her eyes with her muddied hands.  “I’m sorry,” she said.  “You’ll have to save yourself.  I can’t do it for you.”  She walked back to where she had set down the box containing The Essence of True Love.  The glow, so vibrant before, was now barely visible. It intensified as she picked it up again and held it close to her. With tears still in her eyes, she wished him well and walked on without looking back.  As she walked, the glow of The Essence of True Love built until it was again bright and strong.

She found Persephone and presented her with her mother’s gift.  Persephone opened the box and The Essence of True Love flooded the Underworld, pouring over Persephone, her husband, Aphrodite and the rest of the world.

She returned to Demeter and was given her Goddess powers again and congratulated on a job well done.

She never knew what became of Galwarth, but that was not her story. It was his to write and he had to be the champion of his own experience.

The Moral of the Story

*You can become so mired in the problems of others or trying to save them, that you, yourself can be sucked in and drown in their situation.

*If you collapse yourself into the world of and problems of your mate, The Essence of True Love can be lost forever.

*Ultimately, you have to allow others to save themselves, you cannot do it for them

*Stay on task if you are on a path to better yourself and do not let the drowning people around you pull you down with them.

3 Replies to “Do Not Stop To Save the Drowning Man”